Zoom in to meet your favourite Little Penguins 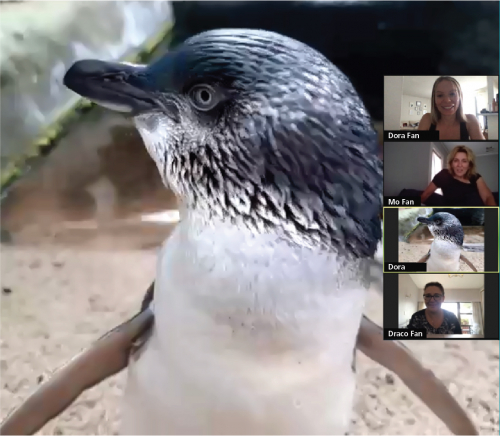 While New Zealand and much of the world was in lockdown, the National Aquarium of New Zealand’s Little Penguins the penguins were missing having their friends visit them. While the Aquarium’s live penguin encounters were a no-go, Timmy, Dave and the rest of the gang realised they could move online, just like the rest of us had to.

National Aquarium of New Zealand General Manager Rachel Haydon says “Our Little Penguins have so much love from the global community that we needed to come up with a way to keep them connected.

“We’re so excited to share this new virtual ‘encounter’. Even though New Zealand’s lockdown is now over, it’s still a great way to continue to connect our animals to their fans. Not only that, it’s an opportunity for our penguin followers around the world to interact in real time with the penguins, when they previously couldn’t.”

Up to four virtual guests can login at the same time – so people can invite their friends to join in from anywhere in the world. The encounter itself is a 15-20 minute video call. Guests are shown around the habitat, including visiting some burrows and they are encouraged to ask questions of the penguins’ keeper.

“Anything can happen during a call! During a recent test session there was a bit of a scrap between two penguins which our keeper had to break up. They certainly haven’t been put off by the camera!” says Rachel.

“Of course animal welfare is paramount with any encounter and a virtual encounter is no different.  We are conscious of not disturbing our penguins. It is about watching them go about their daily routine and learning more about them.”

The live virtual encounter is believed to be one of a kind in New Zealand. While other zoos and aquariums offer web cams and recorded interactions, the National Aquarium’s Live Virtual Penguin Encounter is the only offering that is interactive and exclusive to a booked group.

The National Aquarium has been testing the virtual encounter experience over the past few weeks, with great success.

One top fan of the National Aquarium and of the Little Penguins who was keen to test the product was New Zealand actor Jonno Roberts, who recently played the character Draco on New York’s Broadway.  He also invited his friend, award winning actress Caitriona Balfe who is best known for her starring role as Claire Fraser in the drama series Outlander.  The team received great feedback.

“Our team were extremely excited to meet Jonno and Caitriona. It was a wonderful opportunity for the National Aquarium to receive their support and positive comments about our new online encounters,” says Rachel.

The online encounter doesn’t replace an actual visit to the National Aquarium. It encourages people to visit - demonstrated by the response from a test session with penguin fans in Los Angeles, who said:

“That was amazing. My mom could not believe it! It felt like we were there - so awesome. We talked afterwards about how badly we want to visit the aquarium now (and how the call has ignited a love of Dave for both of us, though we still have our original faves!). Hopefully we’ll be able to make it out there sometime next year after all of the Covid restrictions have lifted!”

The virtual encounters are available daily at 9am New Zealand time and can be booked online.