Penguin of the Year voting begins 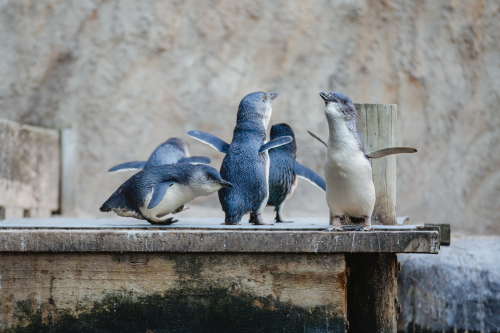 New Zealand is holding an important election in October. The candidates are diverse and they often disagree with each other.

There’s Flip, whose single left flipper makes him a very left wing candidate. Then there’s Timmy and Draco, the strongest coalition partners among all the candidates - being previous winners and a couple – but Dave is doing his best to upend that alliance.

Who is going to be crowned this year’s Penguin of the Year? From Thursday 1 October, you’ll have the chance to vote for your favourite to make the finals.  The three finalists will then be announced on Friday 9 October. Fans will then need to make their next vote count - they’ll head to the online ballot box again and vote for their favourite flippered finalist from Friday 9 October until Tuesday 13 October. The coveted Penguin of the Year winner for 2020 will be revealed on Thursday 15 October.

There’s no need to enrol for this election! Voting will take place on the National Aquarium’s website.

The whole Little Penguin crew at the National Aquarium of New Zealand are held in high esteem by visitors, but ever since their keepers started awarding Penguin of the Month, in June 2017, their popularity has grown in leaps in bounds.

Last year, votes came from as far afield as Germany, Chile, England, Brazil, Iceland, Australia and Israel – and with regular social media posts about the little birds’ latest goings on still attracting hundreds of comments each time, General Curator Joe Woolcott expects the 2020 competition to be just as exciting.

“Due to the lockdown earlier in the year, we saw an increased interest in our penguin’s activities through our online channels, meaning they now have an even bigger fan base,” says Joe.

“We’re expecting bookings for our online Virtual Penguin Encounters to fill up fast as this will give our followers a great insight into the various characteristics of their favourite penguins and may confirm who they’ll vote for.”

“Running our Penguin of the Month and Penguin of the Year gives us the opportunity to share with our followers the challenge Little Penguins face in the wild, and what they can do to help,” says Joe.

All of the Little Penguins are there because they need help from the National Aquarium’s specialist staff. They arrived as abandoned chicks, have been injured in dog attacks, are partially sighted, or have become sick in the wild. Some are missing flippers due to getting caught in fishing nylon.