National Aquarium of New Zealand educator, Jacque Wilton, tells us about celebrating Matariki with the team from Atea-a-Rangi.

Rain, howling gales, or shine, Matariki goes ahead and this year was no exception! For the week of Monday 21 June through to Friday 25 June, I had the opportunity to join the team from Atea-a-Rangi Education Trust and celebrate the Māori New Year.

The event was aimed at students from various kura (schools) from around Napier and Hastings, and as far north as Mahia. They had the chance to learn all about the star compass at the Waitangi Regional Park, rubbish in the environment, learn traditional Māori games, parts of a waka and do some planting of native trees for the area. 639 tamariki (children) filed through the marquee, being entertained and educated by the teams from National Aquarium of New Zealand, Atea-a-Rangi Educational Trust, Te Toki Voyaging Trust, Sport Hawke’s Bay, Hawke’s Bay Regional Council and Enviro Schools.

I looked after the National Aquarium's station, which included making wishes for our July school holiday Matariki activity (these stars will be added to the community kete and then planted under native trees) and then discussing the nasty para (rubbish) in our moana (ocean). Using our ‘sifting sands’ activity helps get the message across that our beaches are not always as clean as they look.

Having the chance to spend time the team gave me the opportunity to learn more about the traditions and beliefs of Matariki. For example, did you know there are nine stars in the Matariki cluster and they each have meaning?

Matariki: The mother of the other eight stars, 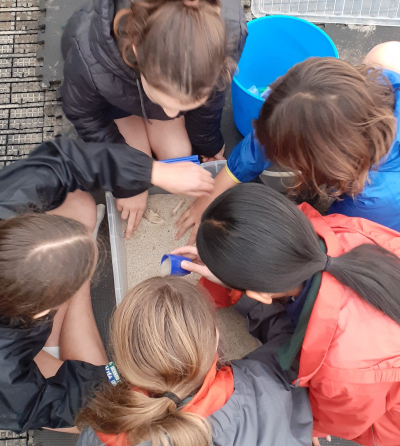 The feedback from the teachers was fantastic. Most comments included that the mixture of activity and making wishes was exactly what the tamariki needed to stay engaged.