Forty six days after being found in a car park with oily feathers, Polly the kororā was safely released back to her natural habitat on Wednesday. 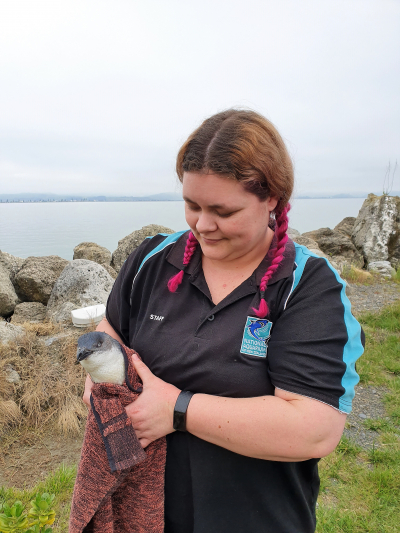 Polly was found by a member of the public near Ocean Spa on Marine Parade. Her underside feathers were covered in oil, and she was nearly half the weight she should have been. She was collected by staff and taken to National Aquarium of New Zealand where she went through a careful rehabilitation process.

“She was seen by a vet immediately. She was dehydrated, underweight and needed a lot of fluid and fish to improve her energy and stabilise her condition.”

After a stay of two weeks at the National Aquarium, Polly was well enough to be transferred to Massey University’s Wildbase Hospital, where she had the oil removed from her feathers. This process uses special detergents and warm water and requires specially trained staff. The process of removing the oil also removed the natural waterproofing of Polly’s feathers.

Once she arrived back at the National Aquarium, Polly was supported to regain her feathers’ waterproofing through having short swims followed by air drying and then preening. Preening helps to ensure a penguin’s feathers are aligned and distributes natural oils that maintain the waterproofing.

After Polly’s feathers were fully waterproofed again, she was given increasing periods swimming time to build up her fitness in preparation for returning to her natural habitat.

“Penguins have to swim to feed, so they need the strength to do that for several hours each day.”

Now at 800 grams, Polly was placed into a nesting box at the Napier Port Kororā Sanctuary on Wednesday by National Aquarium of New Zealand staff.

“She is free to make her way out to the ocean when she feels comfortable to do so.”